Castles Made of Sand: Peace, Quiet and Child’s Play on Queensland’s Bribie Island

I watched from a sand dune as my children played below, the beach quiet and empty, the ocean clear and calm. The bright morning sunlight glowed in their shiny hair, they dug holes, built walls and were peacefully oblivious to anything other than the project at hand. I took a few shots with my camera, the boys laughed and showed me what they had constructed.

I turned to snap a few photos of three 4WDs coming up the beach and that’s when I realised one was headed right for us.  He revved up his engine and gunned it towards the campsite entrance. I screamed and ran towards the boys, we were only a few steps away from the speeding 4WD. The boys jumped up from their sandcastles as the white Prado sped past. He did not even pause or look at us as he bounced over the sand.  It was too close for comfort, sandcastle construction was now over. Fortunately, it was our last day on the island. 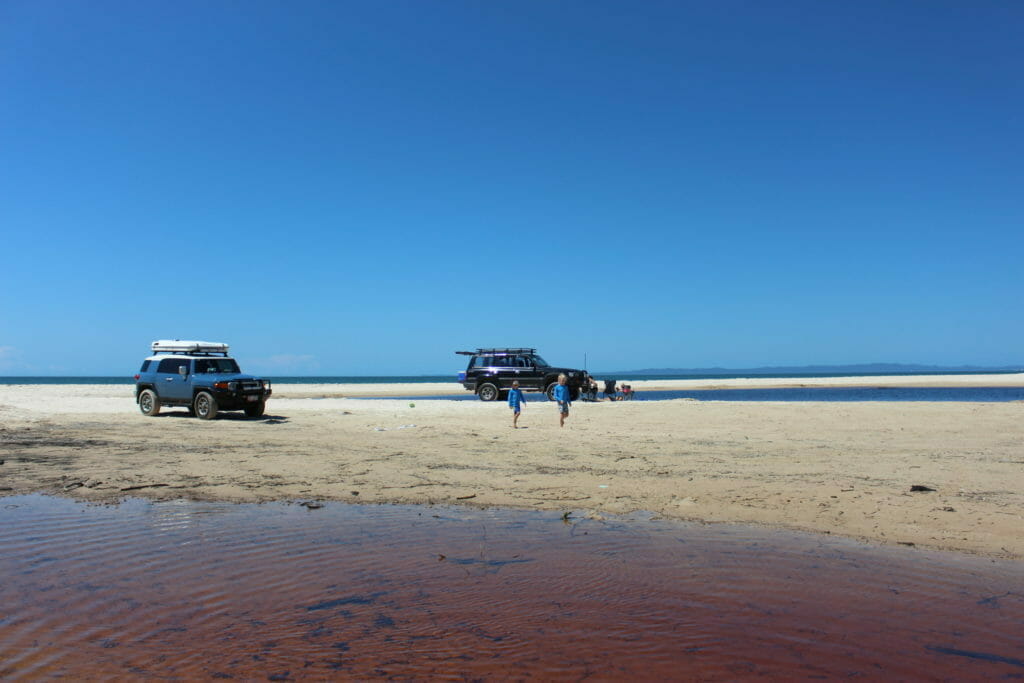 Islands in the Stream

Often overlooked due to its small size and proximity to Brisbane, Bribie Island is a tiny gem in the northern part of Moreton Bay. It’s the smallest of Moreton’s three islands, a mere 34km long and only 8km at its widest point. The northern section of the island is national park and 4WD access only. A bridge connects Bribie to the mainland at Sandstone Point and from there it’s an easy trip and not much in the way besides some sand. I let my tyres down, had a pair of MAXTRAX and a shovel and felt confident that would be enough.

We visited Bribie the week before the spring school holidays to take advantage of the peace and quiet. On our first day we found a cloudless, sunny, thirty-degree paradise along a deserted beach. We easily drove up the beach even at high tide, stopped at the various freshwater lagoons and played in the dunes.  The only major catastrophe that day was a large sea turtle splayed out on the beach that was no longer alive. The rest of the beach was thankfully, beautiful and uneventful.

I had opted for the Ocean Beach camping area, a long stretch of campsites on the Pacific side of the Island. Our site was booked online before we arrived and located in the P section right beside the toilets, showers and water tap. It was large enough for my FJ Cruiser, tent, camp chairs, kitchen and even came with a fire pit (thank God, fires were permitted!)The campground, like the beach was also empty. The only other inhabitants were wallabies, which I didn’t expect to find on this strange, little island. 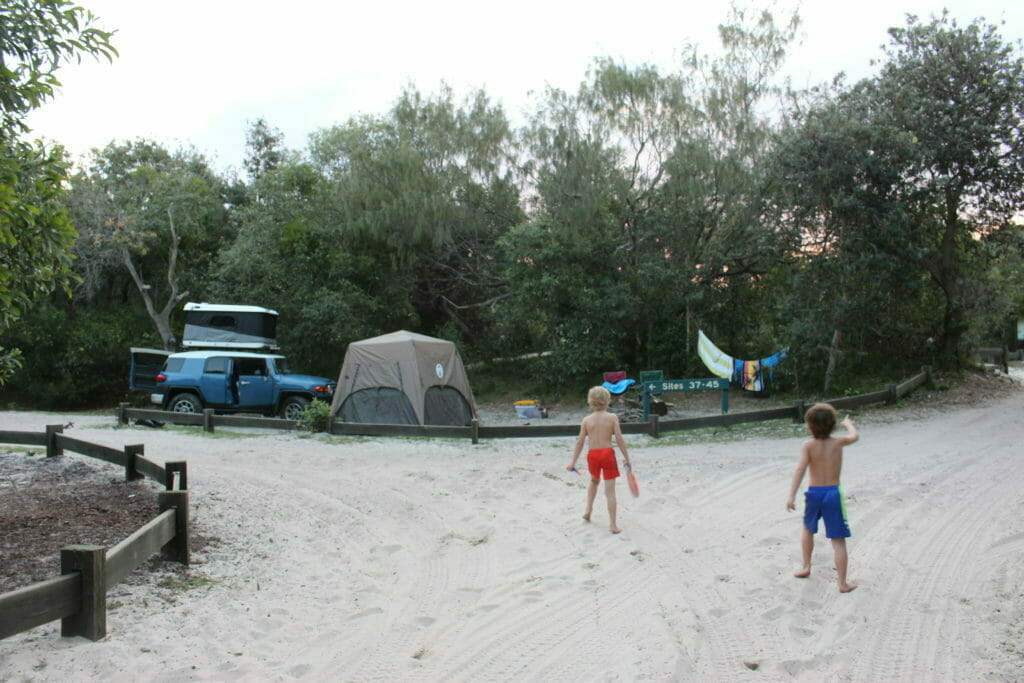 The Rhythm of Life

My goal on Bribie was to rediscover the natural rhythm of life. Nearing the end of the third school term, the boys were tired and as stressed as primary school kids can be – I was of course exhausted. We all needed a break, some time to sit and enjoy nothing but the sound of the ocean, the birds and the roar of my FJ’s engine as she trudged through the soft, white sand. And I’m pretty sure there is no problem large enough that can’t be cured by a nice, hot, smokey campfire. Bribie was simple, easy and not too far from home. It was also a great place to really test the new James Baroud rooftop tent good and proper.

On the second day, a couple in a camper trailer showed up and broke our solitude. We watched from the beach as it got stuck in the entrance to the camping area. Another 4WD came along and snatched it into the campground. A bit dismayed, they ended up being a quiet elderly couple who probably thought me and my five and six-year-old were incredibly loud, especially when we sang along to Taylor Swift at dinner time. 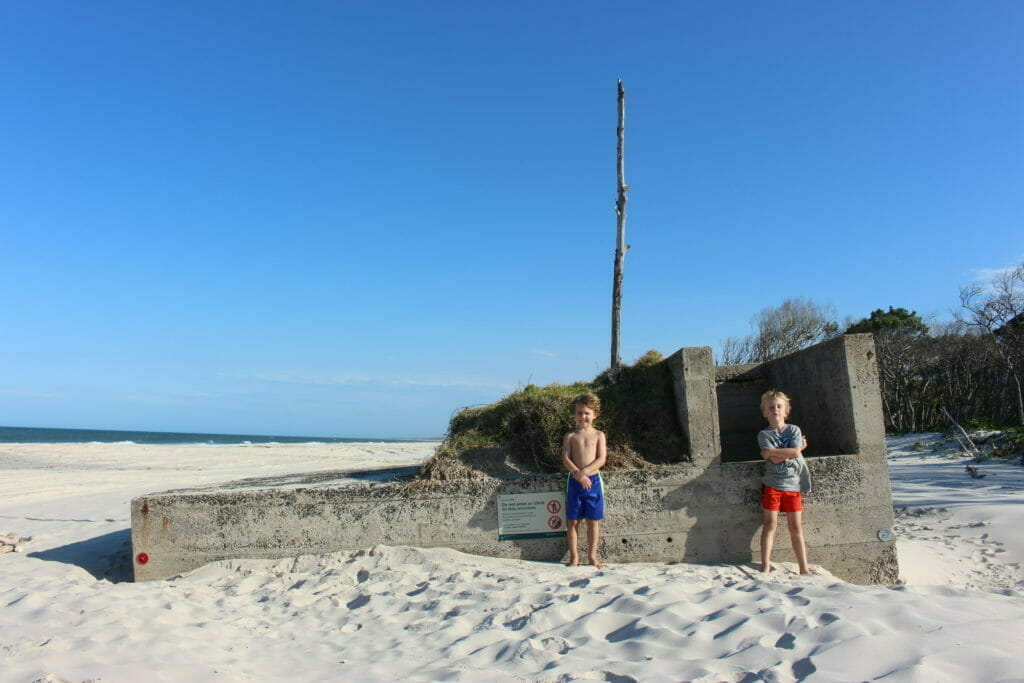 Each day at some point after breakfast and a swim in the ocean, we packed up our rooftop tent and headed down the beach to go exploring. The island was small, but at the end of the main beach sat several crumbling WWII fort ruins, the leftovers of Fort Bribie, which my boys found fascinating. I parked the FJ in the general area of several of these ruins and just let them run wild. They couldn’t go inside the massive concrete structures because it was too dangerous, but they played in the dunes around them pretending to shoot down the Japanese or the ‘baddie Transfomers’ or just ‘mean snakes’ depending on the day.

From the northern point of the island across Pumicestone Passage, the small town of Caloundra rambles over the point at Bulcock Beach jutting into the Pacific. From here you can get mobile reception, at least enough to check your calls and emails. If you follow the 4WD track off the beach and west towards Lighthouse Reach, there is an inland route that leads to Lime Pocket, Mission Point and the most popular campground, Poverty Creek. From here, the track leads back to the bitumen and eventually to the bridge at Sandstone Point.

Since the small towns of Woorim and Banksia Beach were so close by, we drove back into civilisation each day for supplies: ice creams, gas bottle refills, trashy magazines and fun playgrounds. Sitting at a playground in the small town of Woorim, I watched as black clouds rolled in from the west. I checked the radar and sure enough huge, red splotches were heading right for us. I pondered the situation for a minute: head back to camp and pack up, avoid the really nasty storms headed our way, or buckle down and see them through. I opted for the latter and hurried back to camp.

It was our last night on the beach and we decided to watch the frothy storm clouds surge over us until the rain sent us scrambling for the tents. Luckily, the bad stuff moved further south and unleashed its fury on Brisbane instead. It rained all night, making the ladder of the rooftop tent especially tricky. But we stayed high and dry in the James Baroud and woke up to another sunny day. Fortunately, the crowds didn’t show up until the end of the week and by that time we had found our rhythm.

– To drive and camp on Bribie Island, you will need to purchase vehicle access & camping permits. It’s $44.70 for a one-week vehicle access pass + $89.25 to camp for 5 nights (one adult + 2 children). Go to www.nprsr.qld.gov.au to book online, they are not available on site.

– Bring recovery gear, especially if you are towing a camper trailer. The sand is soft and deep. I got by with a pair of MAXTRAX, shovel and tyre deflator (but I was lucky).

– Camping in the Ocean Beach campground does not mean amenities. Most areas do not have toilets or water, you must bring your own supplies. The only camping area that does is P. Most of the campgrounds along Pumicestone Passage do have amenities (but lots of mozzies and sanflies too).

– Bribie is an easy to moderate 4WD experience, great for beginners, families or those like me who just like things easy and quiet. 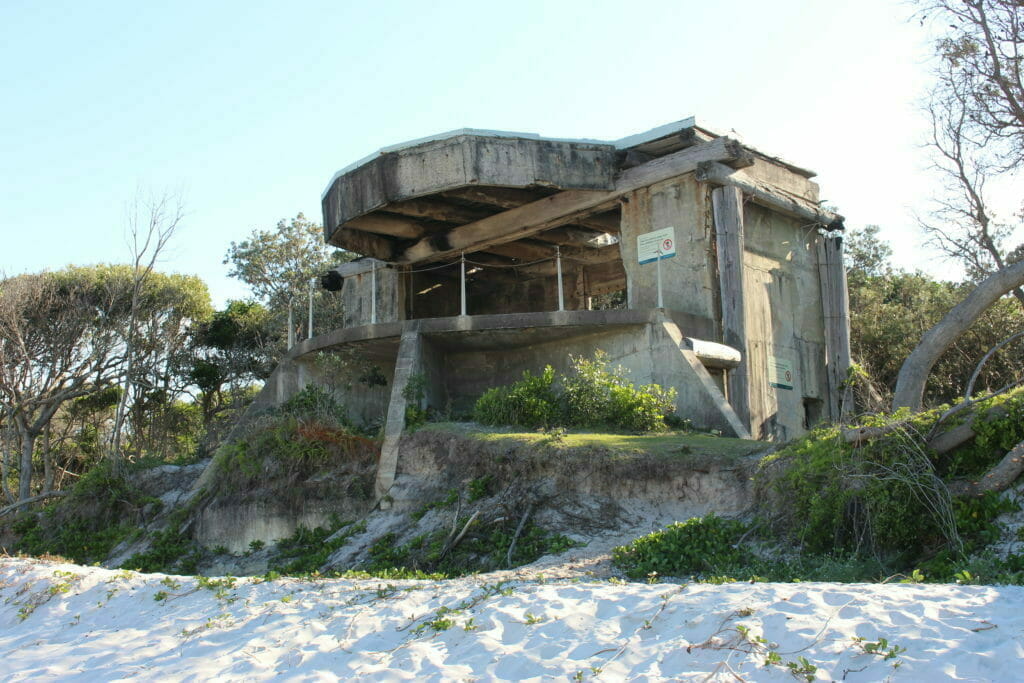 Fun Stuff to do on Bribie

– Watersports: surfing, boogie boarding, swimming on the beach side and in Pumicestone Passage the water is fairly calm so great for boating and floating.

– Bushwalking: the area north of Fort Bribie is closed to 4WD traffic and only open to those on foot. There is also a short walk to the old lighthouse site at Lighthouse Reach.

– History: Fort Bribie was constructed from 1939 – 1943 to protect Moreton Bay and Brisbane from the invading Japanese during WWII. The ruins of several gun emplacements , bunkers and huts remain.

– When it rains, the James Baroud rooftop tent stays dry –except for the lining around the bottom of the tent where the seam is – this gets wet and soaks into the mattress a little.

– 4WDing is best done after lunch when everyone is a bit sleepy!

– If towing a camper trailer on Bribie, bring lots of recovery gear.

– We collected flowers, bushes, shells, rocks and feathers and tried to identify them all (since we missed a few days of school).