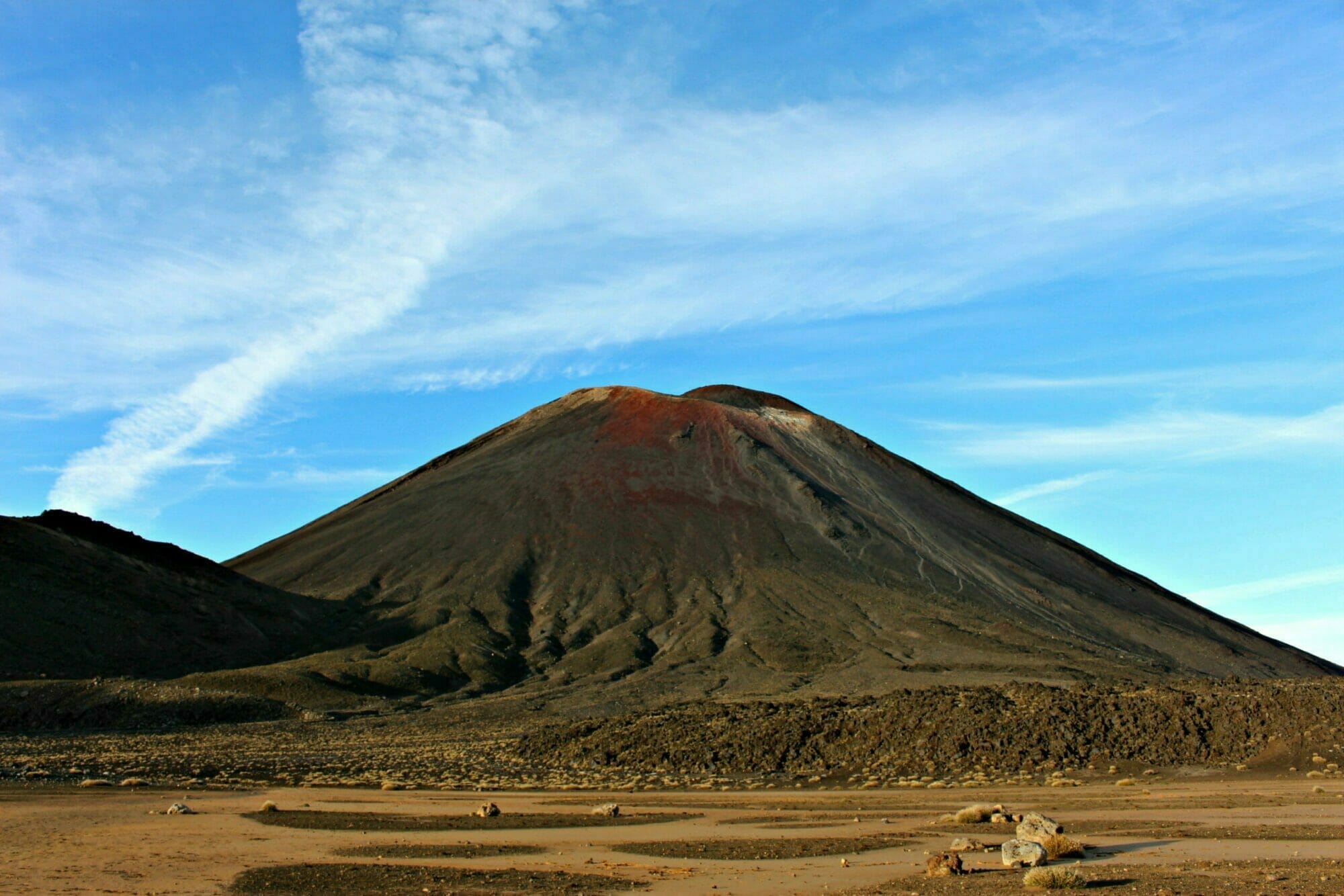 The Tongariro Alpine Crossing – although just a day hike – isn’t for the feint-hearted.

It’s a day hike (19.4km approximately 7-8 hours if you keep up a good pace) and it may or may not involve severe weather – even in Spring and Summer. Be prepared with extra layers of clothes, rain gear, food and water and legs in reasonably good knick.

I used to make fun of hikers (or as they say in NZ, ‘trampers’) who used poles, but somewhere in the middle of the Alpine Crossing I begged for a single pole and loved every sturdy second of it. But the Crossing is glorious – from the bubbling Soda Springs to the mineral-blue lakes, it’s a smorgasbord of 360 degree views, barren volcanic landscapes, smoking vents and the lapping waves of Lake Taupo in the distance. If you’re ever on the North Island make sure you visit.

We woke up at 4am, threw on our layers, laced up boots and packed water bottles and food into our sacks. Even in April it was cold – we wore hats, gloves and two layers of pants and warm, winter jackets. We stayed nearby at the Chateau and at 6am we were dropped off by a shuttle bus at the beginning of the track on Mongatepopo Road. It was still dark and we hiked over a crunchy dirt path using the light from our head lamps. After a little while, we could hear rushing water all around us (the soda springs) and we began to walk over bridges and subtly ascend. To our surprise, when the sun rose over the horizon, we could see we were in a valley with water snaking all around and under us, racing down towards the lower elevations.

The main track however, continues up the valley, following the Mangatepopo stream and around the edge of an old lava flow. As the altitude increases, plants disappeared and in their place black rubble, sand and large boulders took their place. plant species along the track.

From Soda Springs the track becomes steep – very steep, gasping for breath, heart pounding steep – climbing from 1400 to 1600 metres above sea level. The view gets better and better with every step and the valley below drops further away. Known as the “Devil’s Staircase” this section leads towards the red-tipped Mt Ngauruhoe looming above and the flat lands of the South Crater.

The landscape is best described as black, ashen and burnt – it’s volcano country. Here, the trail is covered in layers of ancient and modern lava flows and other volcanic deposits, so the surface is anything but smooth. Pay close attention to each step.

On a clear day the view down the valley and out across the surrounding countryside is stunning and towards the west you can see the perfectly formed volcanic cone of Mount Taranaki before reaching the flat track section towards South Crater.

By the time we made it to the flat section of South Crater, our legs were burning, but the air was getting cold. It was still early morning and the sun was low in the horizon. We passed South Crater where there was another short climb on an exposed ridge, following the track to Red Crater – the highest section of the Alpine Crossing (1886m).

From Red Crater, the views are mind blowing. First of all, we had no idea how high we were but with the views across the Oturere Valley, Rangipo Desert, Kaimanawa Ranges and down towards the Emeral Lakes, our mouths hung open in disbelief but soon dried out due to the blustery wind. The wind here was cold – bone chilling cold – and so gusty we thought we’d be pushed over.

But standing on the top overlooking the black landscape, the lush valleys, the pastel-coloured lakes and the full moon still in the sky – despite the exhaustion and the wind burn on my face – the stamina required to get to this point was worth it. It was the final push and it felt like it.

From here, the experience turned into a symphonic crescendo – the slow build up the side of the mountain, the tension increasing with each step, to finally feel the intensity explode inside you when the summit is reached the world splays out below you in all its colour and glory. Standing on top of Red Crater felt like the Ode to Joy from Beethoven’s 9th Symphony. I finally understood why people risk everything to climb mountains.

Climbing to the top of Mt Tongariro is no easy feat. The wind is gusty, the rocks are loose and it feels as though you’re climbing straight into the sky and will soon lose your footing. Coming down off of Red Crater I was dizzy – dizzy with exhaustion, cold and amazed by the beauty all around me. Trying to take it in and not fall down required a great deal of concentration. My gloved fingers were frozen from the wind and I had trouble gripping my beloved pole.

Once atop Red Crater, the view changes and sulfur-rich lakes come into view with the largest one – Blue Lake sitting peacefully inside a crater. The descent from Red Crater requires extra care as the loose scoria underfoot causes you to slide rather than walk down this part of the peak.

To the left, an old lava flow from Red Crater spreads out across the floor of Central Crater. To the right the Emerald Lakes sparkle fluorescently in the morning sun. Minerals leached from the surrounding rock cause the colour of the Lakes. The air smells of rotten eggs courtesy of the steam vents above the lake.

Following the track down to the edge of Central Crater involved more sliding than walking. And once on flat ground here, we pulled over for a long drink and some lunch. We had hit the four hour mark.

The climb up to Blue Lake (a cold acidic lake so don’t go for a swim) is easy and gentle, almost a lovely stroll compared to that of Red Crater. The lake is Tapu (sacred) and it is disrespectful to touch, enter, eat or drink around its shores.

From Blue Lake, it’s an easy climb to the edge of North Crater. This crater was once filled with molten lava and then cooled and solidified to give a level surface more than 1000m wide. There are vents steaming and views out over Mount Pihanga and Lake Rotoaira across to Lake Taupo. The track switches back and forth through the valley, over bridges and across ledges and zigzags down to the Ketetehai Shelter. The landscape begins to change – from barren black and red rocks to grass and small trees springing to life.

From the Ketetahi Shelter the track continues down through tall shrubs and into the sun-filled foothills. The air became hot and humid and we stripped off all our layers beginning to sweat. Our legs had turned to a happy jelly by this point and I remember laughing my way down the side of the mountain.

Once on flat land, the trees loom overhead and the stream that flows down from Ketetahi Springs winds over and under the track. Following the poled route down through the open tussock land, the track drops steeply down again to the Mangatetipua Stream. A short side track leads down to a waterfall a few minutes before reaching the Ketetahi Car Park. And here is where the Alpine Crossing concludes.

In terms of bang for buck, it’s priceless. It costs $0 to trek the trail and the experience is a full mind, body, spirit explosion. The scenery, the view, the epic body workout and the accomplishment you feel after a long day’s hike with great friends is better than anything you can buy. If you’re on the North Island – or anywhere in New Zealand – don’t miss this!

The Must-Haves For Your Trek:

Tongariro National Park can be subject to unpredictable weather, and conditions can change quickly. It is important that all walkers carry the essentials for their journey across.

Due to the rugged and alpine environment, the weather in the car park at the beginning of the track can differ greatly from conditions 1000 metres higher further up the track.

Be prepared to change your plans and turn back especially when visibility is poor or strong winds prevail.

To find out more, visit the official website here.

The Tongariro land mass was formed by a multitude of eruptions from at least six different cones which all share the same alignment. The oldest lava started flowing about 275,000 years ago, near what is now the Tama Lakes on the southern flanks of Mt Ngauruhoe.

The eruptions continued for the next 200,000 years until the Ice Age. As the ice retreated, it carved out valleys clearly visible in the lower Mangatepopo and Oturere valleys. Red Crater and Mt Ngauruhoe are the most recently formed features on the Tongariro Alpine Crossing.

Red Crater was formed about 3000 years ago. It lies within a scoria cone which rests on top of the older Tongariro lava flows. The red colour is due to the presence of oxidised iron in the rock.

The most recent confirmed volcanic activity from Red Crater was reported between 1855 and 1890. The dike on the Southern Wall has been exposed by erosion. Lava would have flowed through this dike and poured into the Oturere Valley.

Mt Ngauruhoe is the youngest volcano in the area having begun to form about 2,500 years ago. It is the most active vent in the Tongariro area with its last eruption recorded in 1975. The most recent flows from Mt Ngauruhoe are easily visible on the way to South Crater.