I’M LOVING…
The Technological Difference Between Spirit and Soul
Is Your Mind a Cult or Cultivated? Here...
WOMEN NEED MORE RIGHTS THAN ANYONE ELSE
Knowing How to Regulate your Emotions is the...
Clearing Limiting Beliefs Will Help You Live Your...
What to Do When You’re Feeling Triggered
How I Used Alcohol to Cope with My...
My 11-Step Self-Care Protocol to Combat Stress, Anxiety...
FREE Workshop: Stepping into your Individuality and Accessing...

Christina Cannes grew up in the US. From the outside, her life looked golden. Raised in an affluent suburb with two parents – one a teacher and the other an engineer – she succeeded academically in her younger years; played sports such as tennis, softball and soccer; and had a group of heathy friends. No one knew what was really going on at home.

“By the time I hit high school, I was melting down,” explained Christina. “I struggled with an eating disorder – bulimia – and began to fall into the familiar trap of drinking and hanging out with the wrong crowd. My good grades disappeared, I skipped school and the bulimia became so bad that my mother finally took me to a psychiatrist. But even with my psychiatrist, domestic violence and abuse was never discussed or explained. He just put me on Prozac and said I had a chemical imbalance in my brain. He didn’t understand that I was being physically and emotionally abused. He never explained to me how unsafe and unhealthy my homelife actually was despite what I told him.”

Police and courts did little to intervene. After four years of court battles her parents finally divorced and things settled down. Christina went on to graduate from university with honours and begin a successful career in marketing. Even in her twenties she abused alcohol to cope with and numb the past.

“While I knew my childhood was horrific, I still unconsciously thought it was all my fault,” explained Christina. “Children don’t understand why their parents hurt them. I had no self-esteem and I thought I was just broken. I fundamentally believed I did not deserve love and that I was not good enough. And I didn’t have the tools to help myself.”

“It wasn’t until I was in my mid-twenties that I discovered what personality disorders were and how they contributed to abuse. After watching an investigative show about serial killer Ted Bundy, I realised that my father shared many of his same characteristics – severe narcissism (NPD) and psychopathy (Antisocial). I researched the disorder and although this allowed me to understand cognitively, my childhood abuse was not my fault, it did not change things on my subconscious level – I still believed they were my fault.”

Flash forward to age 28, Christina had moved to Australia, married and given birth to a baby boy. Because Christina had not properly healed her abuse from childhood, she had unconsciously married a man just like her father and mother – narcissistic, showing signs of psychopathy and emotionally abusive.

“It wasn’t until after the birth of my second child that I knew for sure something was terribly wrong.”

Christina began seeing psychologists, one because she suspected post-natal depression, another to help her with anxiety, then another for the relationship.

“All up, I visited over seven psychologists during my seven-year marriage – even one a two-hour drive away – and none of them understood that I was being abused. None of them even muttered the word. Only one of them even made the connection between my childhood and the same patterns showing up in my marriage. I think it had a lot to do with how high-functioning I was – I looked healthy, had two beautiful kids, a great career, house – I didn’t fit the perceived description of domestic violence. I wasn’t being beaten, but I was being abused emotionally and financially.”

It wasn’t until her own marriage broke down that the word abuse was finally put on the table.

“I was back in the US visiting family. My husband had begun an affair with another woman, so I was trying to figure out what to do. I was scared and I didn’t want to go see another psychologist, so I went to see a dear friend. She was the first one who had ever said to me, ‘You are being abused and you have been abused your entire life.’ As soon as I heard the word abuse it was a revelation. No one had ever explained it to me.”

Christina came back to Australia to begin divorce proceedings knowing that she had a tricky battle on her hands.

“No one understands abuse unless they’ve been through it. When it comes to domestic violence, victims need protection and what I found is that police and courts are not equipped to handle it properly. There were some wonderful organisations, such as SCOPE, which helped me with DV support while I was dealing with protection orders and custody, but besides that, I was pretty much on my own – and it was terrifying.”

What Christina found most distressful was how little support was available after the court orders were finally signed. Victims of domestic violence and abuse experience PTSD, or post-traumatic stress disorder, similar to soldiers returning from war. But unlike soldiers, our battle can last for decades and leave us in a constant state of fight-or-flight, our health impacted by adrenal fatigue and burnout, and emotionally distressed while our children continue to visit the abusive former partner. A better classification is CPTSD, complex post–traumatic stress disorder. This is closely related to post–traumatic stress disorder but occurs when someone is exposed to prolonged or repeated trauma over a period of months or years.

“I was exhausted, alone, traumatised and scared. And I knew I needed to heal, not only from my recent divorce, but my childhood. I knew that my childhood was creating patterns in my life that kept repeating themselves and I didn’t want to live like that anymore.”

Christina decided to take a different route and began to work with professionals who helped her directly heal her abuse – by accessing her subconscious beliefs and processing stored trauma. These beliefs created during childhood (from the ages of 0 – 14), had laid the groundwork for what she would experience in her adult life. Because her childhood was abusive, she would therefore experience or perpetuate abuse later on.

“After four years of healing, I’m a new person,” said Christina. “I am healthier and happier than I’ve ever been and so are my children. We have a wonderful life in Noosa – it’s beyond what I thought was possible for me.”

Inspired to help others, Christina wrote her book for people like her – those who have experienced abuse as a child or recently left an abusive relationship – and want to heal. But she’s developed a quicker way to approach the process.

“I don’t want people to spend years working on this stuff – I want them to heal fast so they can go on to live a great life.”

“It’s time we stopped normalising abuse and assuming that only certain types of people suffer from domestic violence – and that abuse is only physical. Abuse takes many forms including emotional, financial, spiritual, sexual. I want to give people tools to heal themselves and empower people to live their best lives free of abuse. No one should feel ashamed or guilty about being abused. I want to show them how to heal as quickly as possible.”

“We also need to understand that domestic violence is not a stand-alone issue,” explained Christina. “Domestic violence is a symptom of an abusive society. Trying to fix domestic violence within the confines of a society founded on abuse (power and control over people) will not work. We need to fix the root cause and that would require a complete overhaul of life as we know it. Imagine a society where all people are equal and violence has been eradicated because everyone has everything they need to survive. That would certainly solve so many of our problems, including violence against men, women and children.”

To buy a copy of Christina’s ebook “Become Limitless: Healing and Empowerment After Domestic Violence and Abuse” click HERE. 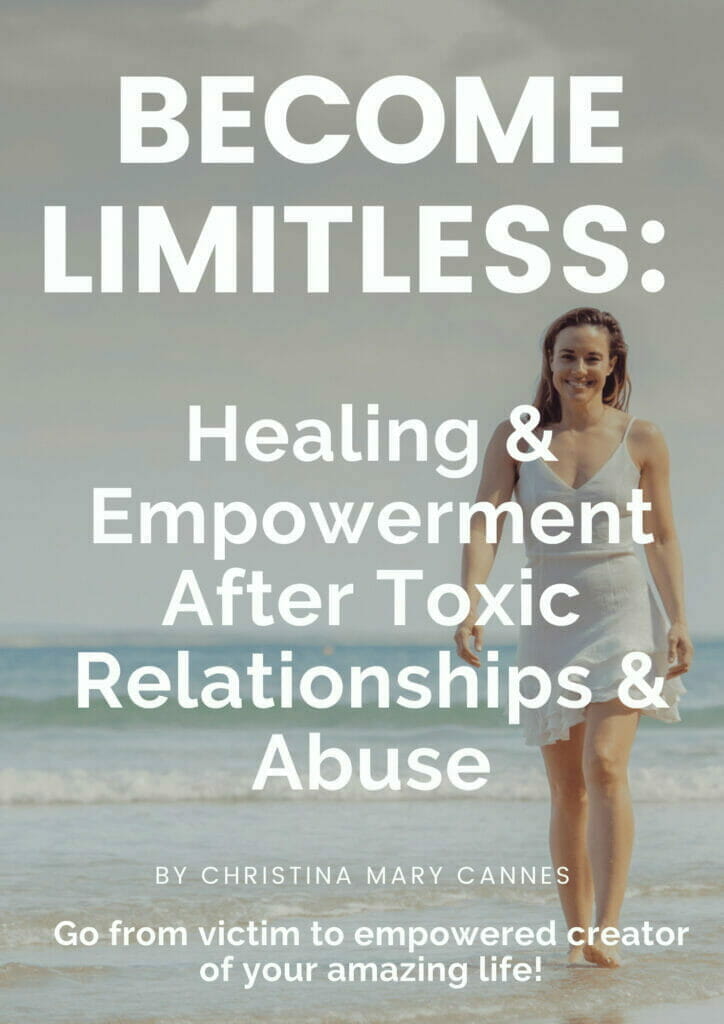 The Technological Difference Between Spirit and Soul

How Personality Disorders Factor Into Domestic Violence and...

Get Your Groove On: Big Beautiful Sky’s Playlist

Save 15% on Your First Purchase