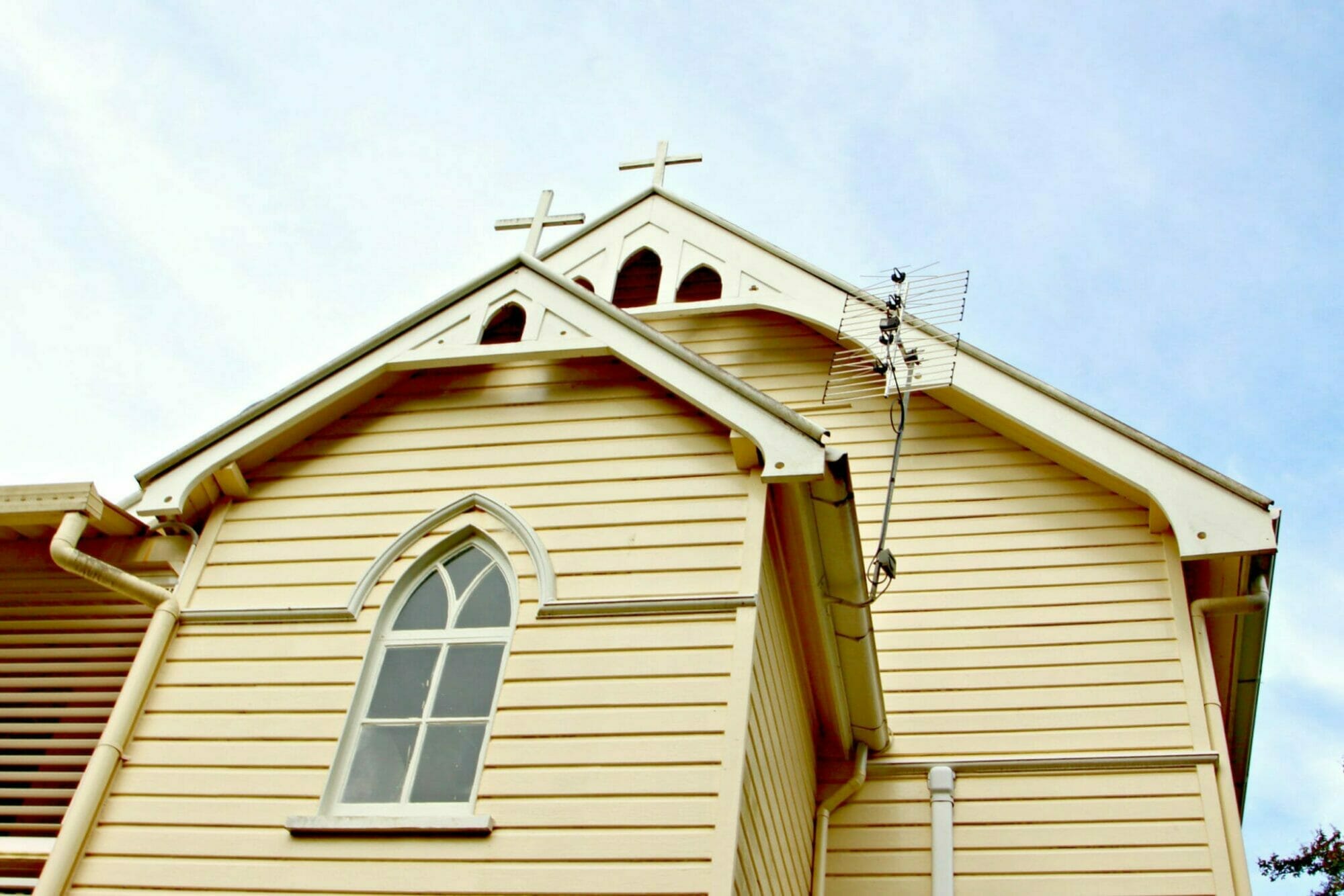 Renown for the bustling weekly markets and local artisan flavour, Eumundi’s historical charm draws visitors and residents from far and wide. Little known, is that it’s also a town with not just one, but two converted residential churches. We sat down with Marlies Waddell who lives in the former Anglican church on Cook Street, to find out what life is like in her re-adapted heavenly haven.

“I was born in the Netherlands and migrated to Australia when I was four. We settled in Geelong because my parents were informed there were a lot of Dutch people living there. We arrived in Geelong in June and my mother gave birth to her fourth child shortly after. It was difficult living in Geelong as a young child and not being able to speak English.”

“When I was married, I lived in Western Australia, but moved back to Geelong after the marriage broke up for family support. I used to take my children camping every year in Byron Bay, but one year we decided to holiday in Maroochydore. We drove up to Noosa and I saw this beautiful bungalow at Marcus Beach—it was my dream to purchase that house.”

“I bought the house in Marcus Beach in 2002 and felt like I was in absolute paradise. I lived only a three-minute walk from the beach and just loved everything about the Noosa district. One day, my daughter rang me about a property for sale in Eumundi and it was a church! I said ‘I don’t know if I could actually live in a church!’ She insisted and told me to have a look at it and I did! I was absolutely blown away by it. The people who owned the church had bought it to run as a bed and breakfast, but they gave birth to twins and decided to sell the church instead.”

“I purchased the church in 2010 and the previous owners had lived in the church for two years, so I don’t know how long it was vacant after services stopped in 2002. The previous owners did the conversion and made all the changes to the property before I moved in. When I moved in, it just felt like a home. The organ and one pew is down at the Eumundi museum. There were no other artefacts from the operating congregation left over when I moved in. There is a book about the church which is very unique. I feel very privileged to be the owner of this beautiful dwelling—and bell! I don’t think it’s the original bell, however, if Geelong wins the football, I ring the bell!”

“I have had a comment from one person who told me she was married in my church. There’s not too many people who get to sleep on an altar! If people knew my bed was on the altar, I’d just make it into a joke! I don’t actually believe in ghosts, but there was one summer when lightning struck in the backyard so I wondered whether that was someone telling me something.”

“The heritage restrictions apply to the outside of the church, but I can do whatever I want to inside. I need to go through the Queensland Heritage Society to make any major exterior changes. I’ve made changes in the garden and I do consciously try to make it look beautiful. I have people who walk past on market days and ask to come in and have a look and I feel very privileged.”

“The local primary school does a local heritage tour and I’ve invited all the children and teachers to come inside. The kids can’t believe there is a bed on the altar! One little boy asked me if I had a baby, I was 67 at the time, and I said no, and he pointed out there was a portable cot and high chair and I had to explain they were for my grandchildren! The children were more impressed with the little dunny or outhouse, than the church.”

“I had someone as recent as two days ago who asked me if it was still a church. She was very embarrassed and wanted to go. I told her she was welcome to come inside and have a look, but she just wanted to go! It’s only happened about three times since I’ve lived here.”

“The fact that it was a heritage building didn’t really influence me when I bought it. I was drawn to it due to the unique style and my appreciation of older buildings. I’m not keen on living in a modern dwelling. I like a lot of character. The church is really just a studio, just one big room with a bathroom that was the vestry. But it was so unique and the deciding factor as to why I purchased it.”

“I just love everything about the church. I love the windows—some of the windows still have the original glass—the tall ceiling, the type of timber that was used. It is a very sturdy building. The lead-light window at the front which is directly above my head when I sleep—there is a funny story about that because I did develop vertigo. When the ambulance came to take me to the hospital the driver said, ‘I’m not surprised you’re giddy—the whole room is orange,’ (from the window colour).

“I’m very proud to say I live in the little church on Cook Street. Most people know where I live! Cook Street was the first residential street in Eumundi. It’s a street with beautiful character homes. Living in a heritage building isn’t a burden for me because I haven’t needed to make any changes—the church itself is ideal for me.”

“I think the Eumundi township has a lot of charm. There is a wonderful school and I also enjoy the markets and the tourists coming. It feels so alive and gives the town so much character. I love the landscape and surroundings, it’s quite picturesque and beautiful.”

Marlies hails from Geelong, she’s a mother of four, former Montessori school teacher’s assistant and If you’re lucky enough to live near her, she will cook you food, watch your kids and even bring you kindling on cold nights—I call her the Cook St fairy godmother. Thanks so much Marlies for being the world’s best neighbour and sitting down to talk with me.

What to Wear: A Starter’s Guide to Natural...

Recycling: Because it feels so good!