I’M LOVING…
The Technological Difference Between Spirit and Soul
Is Your Mind a Cult or Cultivated? Here...
WOMEN NEED MORE RIGHTS THAN ANYONE ELSE
Knowing How to Regulate your Emotions is the...
Clearing Limiting Beliefs Will Help You Live Your...
What to Do When You’re Feeling Triggered
How I Used Alcohol to Cope with My...
My 11-Step Self-Care Protocol to Combat Stress, Anxiety...
FREE Workshop: Stepping into your Individuality and Accessing... 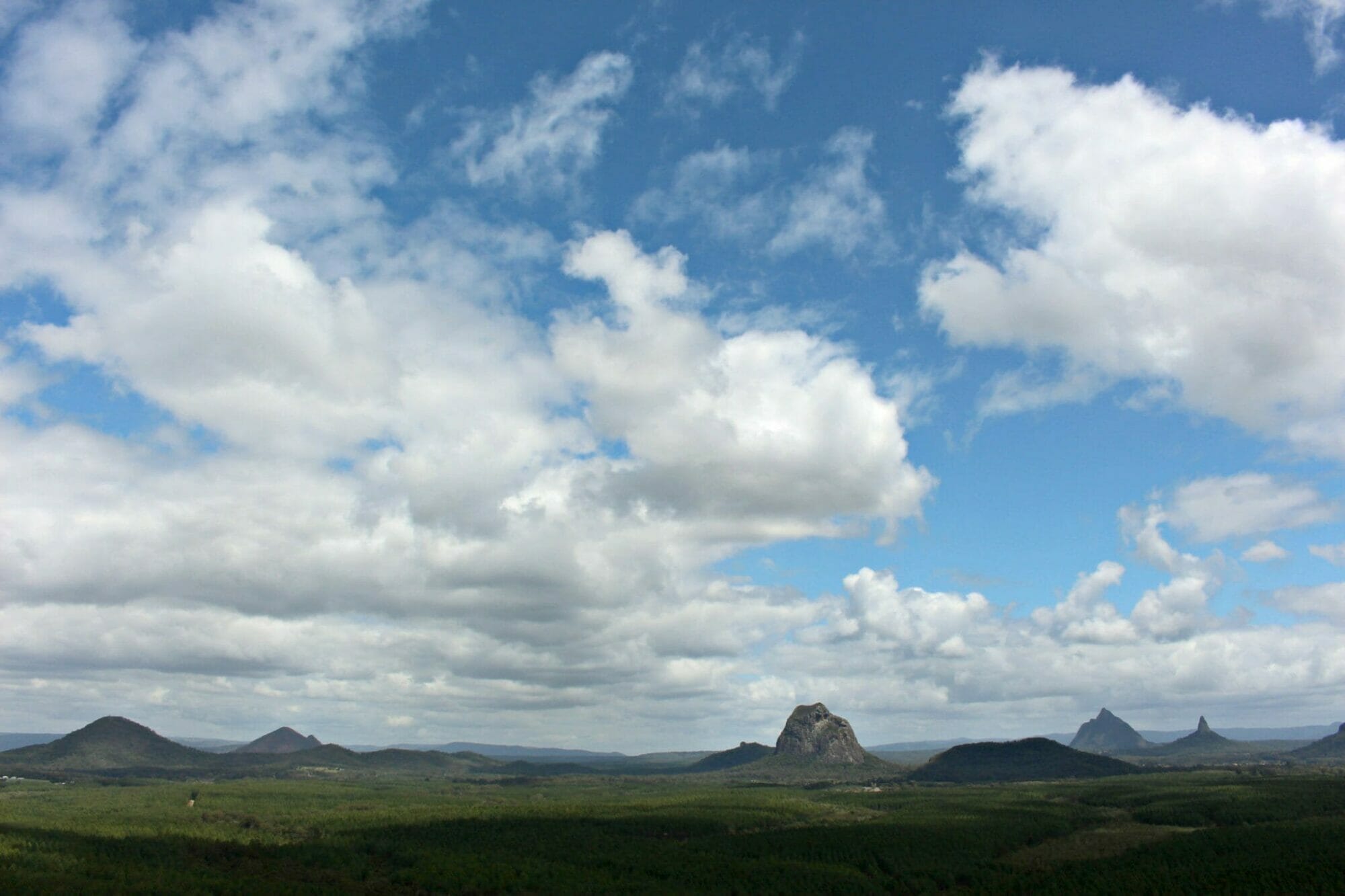 Located about an hour’s drive north from Brisbane, the Glass House Mountains are comprised of eleven iconic, rocky hills, or volcanic plugs, which are the remnants of volcanoes active over 25 million years ago.

Named the ‘Glass Houses’ in 1770, by Captain James Cook, due to their resemblance to glass furnaces back in England, they are columns of comendite from quickly-cooling lava.

Before Captain Cook, they were the sacred domain of the Jinibara and Kabi Kabi Aboriginal people whose origin story involves a family dispute. Using Brad McCarthy’s SE Queensland Bible, Dirty Weekends, we took a relatively easy off road long weekend to check out the dirt tracks winding through these ancient rock formations.

It’s hard to imagine what Southeast Queensland looked like 25 million years ago – but there is something mesmerisingly prehistoric about the landscape around the Glass House Mountains. A maze-like series of dirt tracks winds through the pine plantations around the national park offering glimpses of the iconic rocks, muddy water holes and rutted hill climbs. The trip takes about one to two days and is easy-to-moderate 4WDing depending on the amount of rain in the area. There is only one camping area at Coochin Creek, so we arrived the day before and visited the seaside town of Toorbul for a playground and a swim and spent two nights at the campground.

We started off the next morning further south, at the Caboolture River Bridge along the Bruce Highway (about 45 minutes north of Brisbane), on a bitumen road heading towards Elimbah. Following Dirty Weekends’ trip instructions was quite confusing due to the number of tracks in the area. It’s also a popular place on the weekends with not only 4WDers, but dirt bikers, which can make it a bit chaotic but also a great opportunity to see two wheels tackle the tracks. 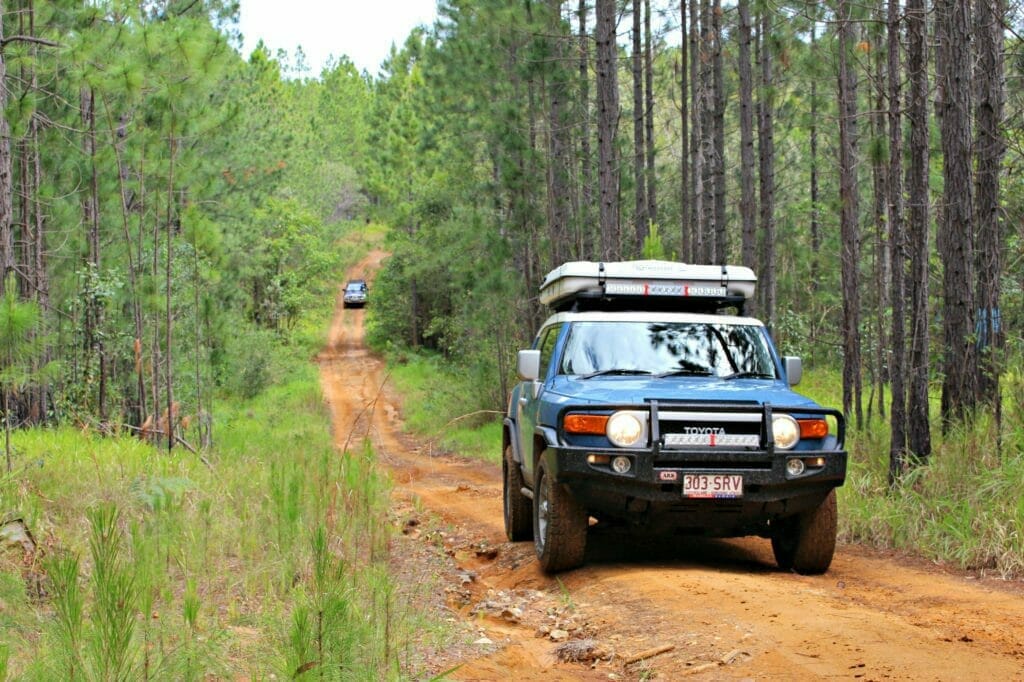 The journey takes you past the rocky shoulders of Mt Tibrogargan and the pointy spire of Mt Coonowrin, two of the most iconic peaks in the park. It also leads into the very touristy section of the national park to beautiful look-outs, past historical places such as Bankfoot House, constructed in 1868 to provide accommodation for the Cobb & Co coaches running between Brisbane and the Gympie goldfields, and the remnants of Campbellville, a mill town founded in 1881.

We got joyously lost in the 4WD tracks, relying on GPS to find our way back to the bitumen, waiting for the rocky peaks to pop up from behind trees or hills as we navigated through the pine plantations. There were a few good creek crossings, and some deep mud puddles, but mostly just dirt track. The driving was easy, but very rough and bumpy at times, and the muddy bits and steep climbs were enough to get the heart pounding, but not challenging enough to require any recovery operations.

The highlight of the journey came near the end of the second day after visiting the Matthew Flinders rest area. About 4km further down is a fully intact Aboriginal Bora Ring. At one point, this circle constructed of raised earthen embankments, was most likely a metre high. Bora rings were usually constructed in pairs, with a bigger circle about 22 metres in diameter and a smaller one of about 14 metres. The rings were joined by a sacred walkway, but this ring was the only one left.

They are the sites of the sacred Kippera ceremony, where young males were initiated into full manhood. The male initiates were led from one circle to the next, along the sacred pathway. The word ‘bor’ is believed to mean the girdle of manhood worn by the young initiates and ‘kippa’ meaning young man. There are only a few remaining bora rings left in Australia, and due to their fragility, it is very important to not walk on the site. There is also an intact bora ring at Toorbul Point, about twenty minutes east towards the coast. Bora rings are sacred Aboriginal sites and must be treated with respect. 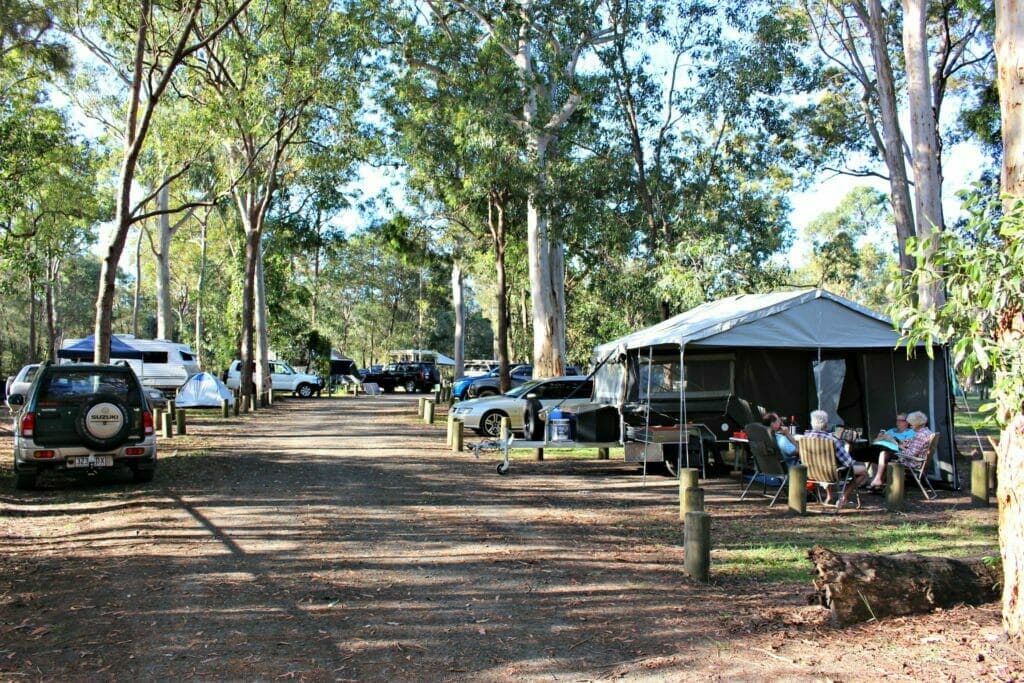 The Coochin Creek camping area was the final destination on our Glass House journey. It’s a lovely little campground located off Roys Road about 3km from Pumicestone Passage. There are 21 sites for tents, caravans or motor homes that must be booked in advance. There is also a boat ramp and access to Coochin Creek which is great for fishing and swimming. Amenities include fire rings and composting toilets.

Mt. Tibrogargan, the father and Mt. Beerwah (highest peak) the mother, had a number of children: Mt. Coonowrin (the eldest), Tunbubudla (the twins), Coochin, Ngungun, Tibberoowuccum, Miketeebumulgrai and Elimbah. Tibrogargan noticed that the sea was rising and called out to Coonowrin to help his pregnant wife gather the young children together so that the family could flee from the rising water. Coonowrin ran away in fear and Tibrogargan, incensed by his son’s cowardice, followed and hit him so hard with a club that his neck was dislocated. When the seas retreated the family returned to the plains. Conowrin, teased about his crooked neck and ashamed of his behaviour, went to Tibrogargan and asked for forgiveness but his father just wept with shame. Conowrin then approached his brothers and sisters to ask forgiveness but they too could only weep with shame, thus explaining the area’s many small streams. Tibrogargan then called Conowrin and asked why he had failed to help Beerwah. He explained that he felt she was big enough to look after herself, though he did not know she was pregnant. Tibrogargan then turned his back on his son and still gazes out to sea today, refusing to look at his son who forever hangs his crooked neck and cries. Beerwah, the mother, is still pregnant, as it takes time to give birth to a mountain.

Save 15% on Your First Purchase