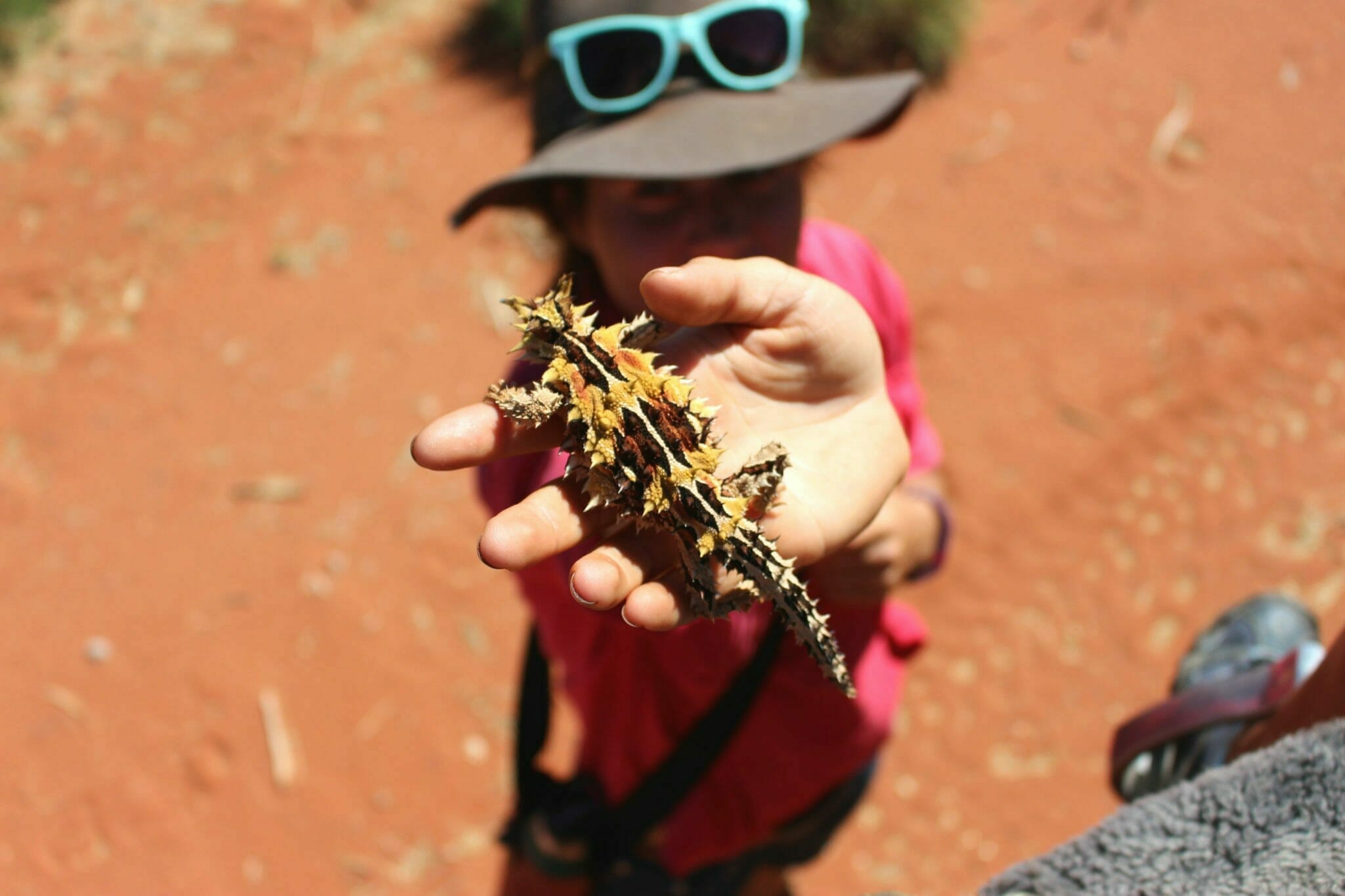 Set the Controls for the Heart of the Sun: Uluru, Katja-Tjuta and Alice Springs

Uluru is the spiritual heart of Australia. The giant monolith rises out of the red sand pulsing its strange beauty across the desert making us question our own significance and truly ponder the passage of time. Because of its inaccessibility, it was only recently discovered by the white man (1872) so Australia’s Indigenous people were left to live beside it without any interruption for tens of thousands of years (until the destructive and unforgiving tourist trade took hold in the 1930s). The land here is sacred. You can feel it. The ancient rock is also known as the third earth chakra, the solar plexus. And like pilgrims to mecca, we trekked to this big rock looking for our own form of salvation. 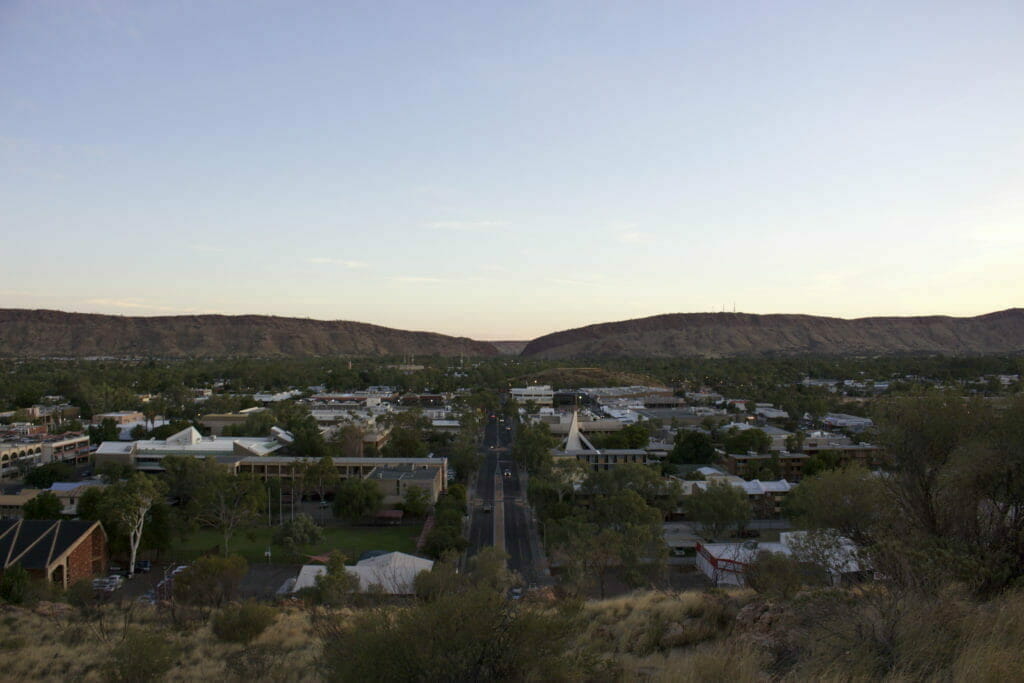 We flew Qantas from Brisbane to Alice Springs via Adelaide which in total took almost seven hours. Thankfully each plane had in-flight entertainment and because of the flights, I had to pack very light. Once in Alice, we hailed a cab to the Apollo rental hub, a quick ten-minute drive, but let me warn you, taxis in Alice are double the price of any other city in Australia.

We opted to rent a campervan namely because we did not need the toilet facilities provided by a larger motorhome as we would be staying at caravan parks for the entirety of the trip. Renting a 4WD was also an option, but the 4WDs came with either tents (no thanks), those ridiculously hard to fold out canvas roof top tents (no way) or a slide-on camper, but these models could only accommodate two people (not enough seat belts). The campervan came with four seats and seat belts, child booster seats, two double beds and was fully stocked with linen, dishes, cutlery, gas bottles, table and camp chairs. All I had to do was sign a form and grab the keys. Luxury! 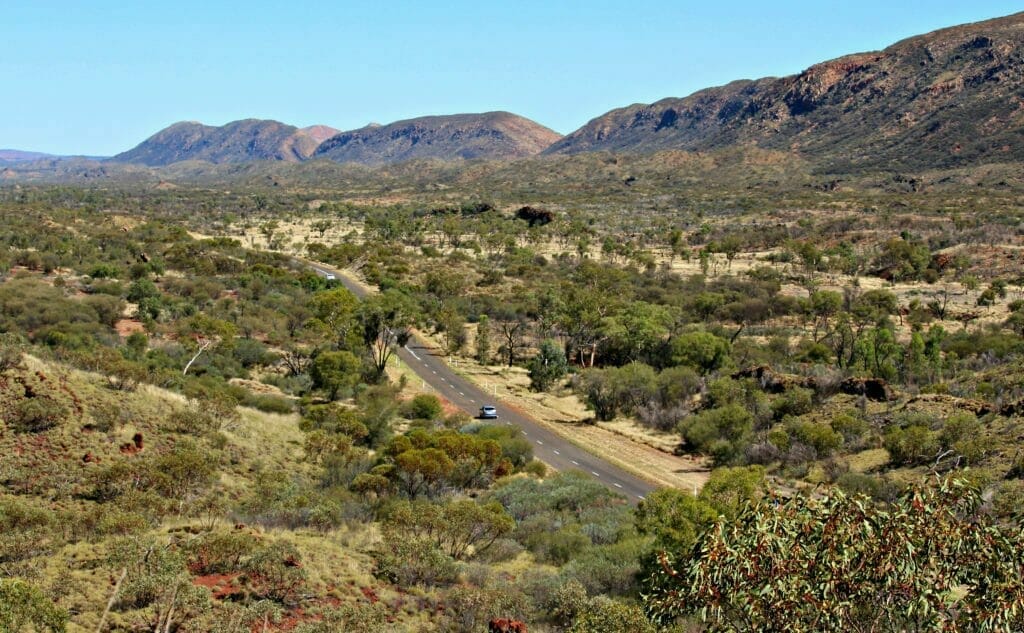 We planned to stay in Alice for two nights and then head south to Uluru for four nights before we came back to the Alice. We booked a powered ensuite site at the BIG4 MacDonnell Ranges Holiday Park, a personal favourite. Not only do the ensuite sites have a full bath and toilet, but they are close to the jumping pillows, playground and pool which has been upgraded to include a huge waterslide. It is paradise and located just beyond Heavitree Gap with beautiful views of the rocky, red Eastern MacDonnell Ranges.

The next day, we stocked up on food and supplies in town and then ventured into the Western Macs for a swim at Ellery Creek Big Hole where we watched a white fellow baptise two Aboriginal adults. The water hole was full and clean and cold so we spent the entire day swimming to the sand bar in the centre and back again. 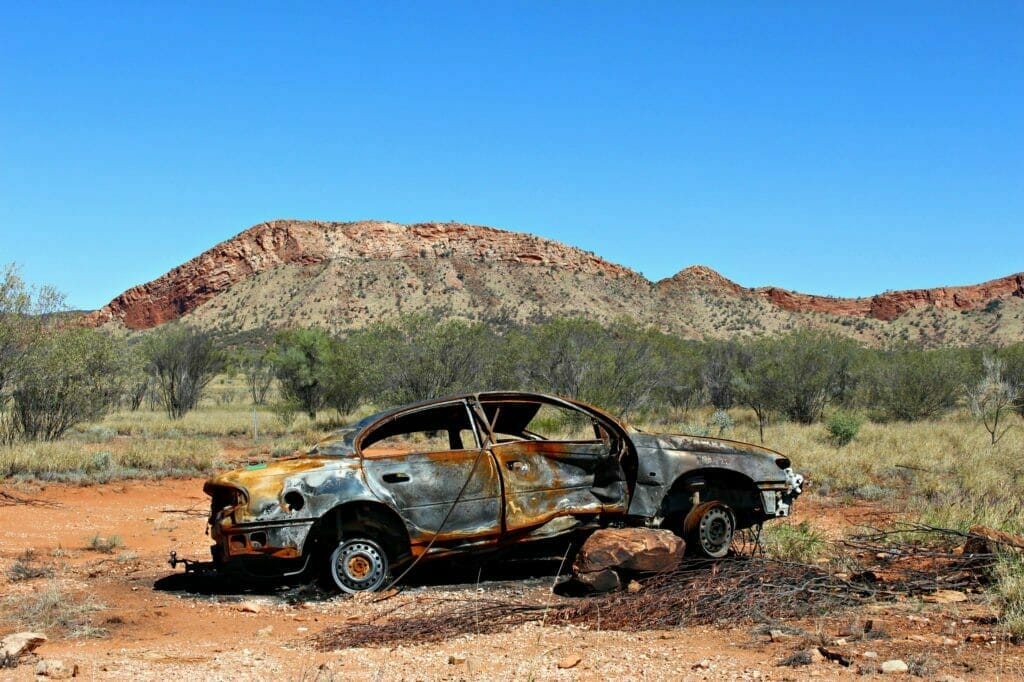 The next morning, we trekked south along the Stuart Highway towards Uluru, stopping at every road house in our path. I missed the desert, its endless horizons and quiet expanses.  It was greener than the last time I saw it, the result of heavy rains during the summer, spinifex covered much of the red dirt from view. My boys were babies last time they had been out here and I noticed the foreignness of the landscape scared them.

We pulled into the Ayers Rock Campground six hours later and found it just as I remembered it – busted, neglected and scarce. Voyages, the company who run Ayers Rock Resort obviously cares less about the touring visitors then they do the internationals who opt to stay in the first-class accommodation. 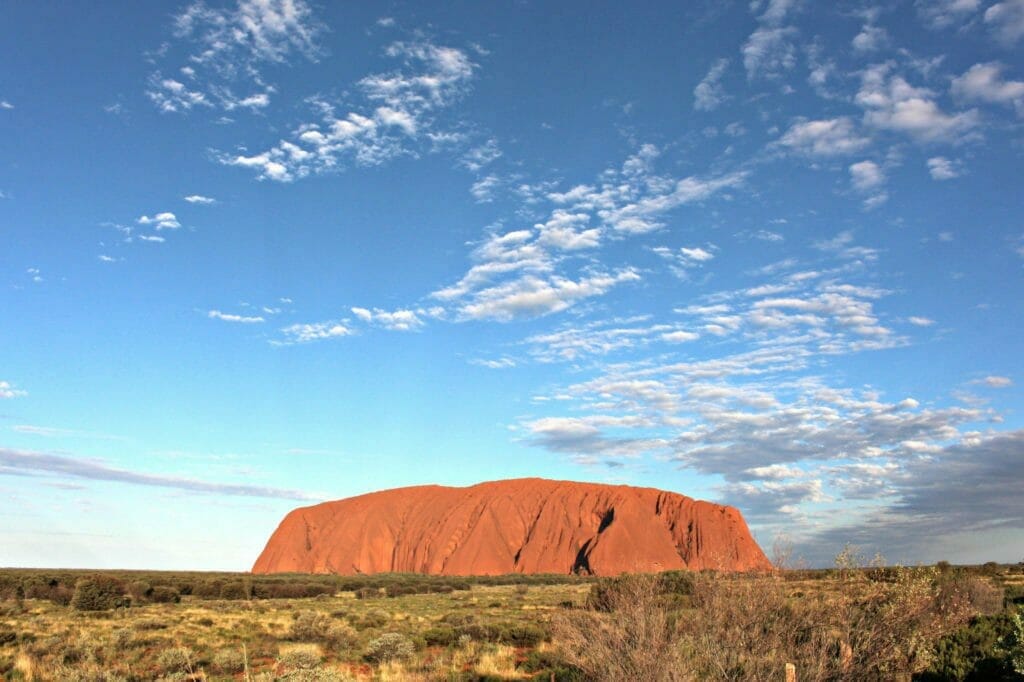 Many families I spoke to drove from the coast and due to time limitations, were unable to see as much at Uluru as they would have liked. It is impossible to see Uluru and Kata Tjuta with only two nights to spare. Most can’t comprehend the size and magnitude of the place, and they always underestimate how much Uluru will affect them. It is an immensely spiritual experience and not giving yourself enough time to fully appreciate the sites leaves you a bit depressed. Flying in gave us much more time, as I had arranged for us to spend one day at Uluru, one day doing camel rides and the Field of Light tour, one day at Kata Tjuta and the last day around the resort as there are many free activities.

We woke before dawn the next day to get to the Uluru sunrise platform. Among the throngs of tour bus folk, I managed to capture the sunrise over the desert, a swirl of pink and orange. Seeing the big, red rock come into view was on par to magic. The first time I saw Uluru, I left knowing that everything in my life was about to change. This time I came here for that exact reason. 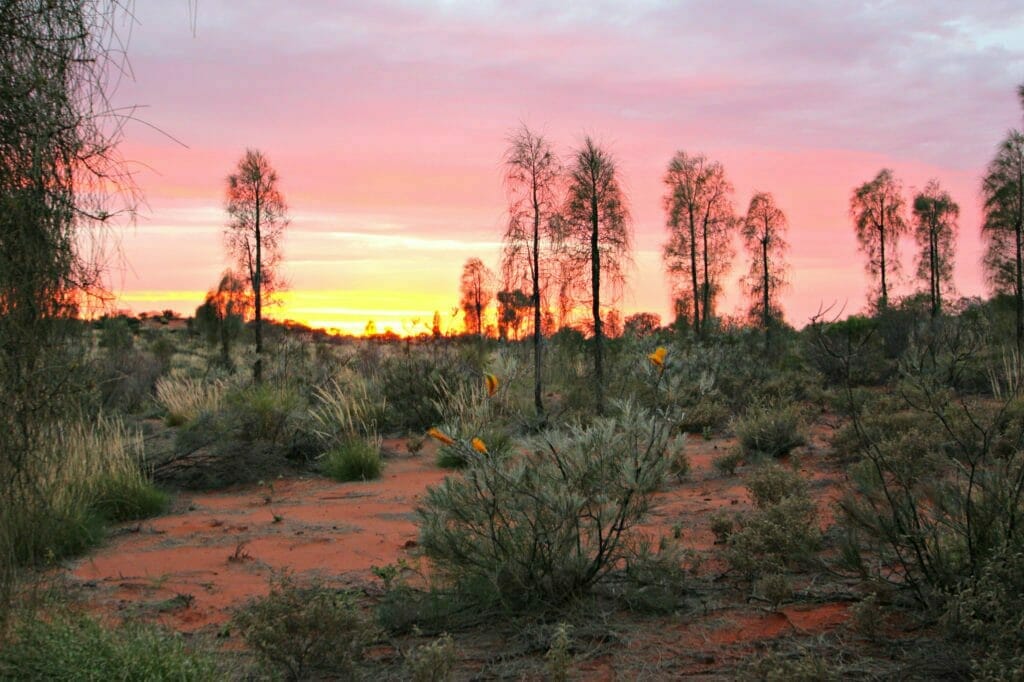 We stopped by the cultural centre so the boys could get a good understanding of the desert animals and ecology, see Aboriginal dot painting firsthand and find out where the best walks were located. We visited the Mala walk first, which is where the climb starts. The climb was closed; as a sacred site the traditional owners ask everyone to refrain from venturing up. The Mala walk is also where the 10k circuit starts, but we opted to drive around the base, visiting rock art sites and water holes along the way. As the afternoon waned, we parked at the sunset viewing area and watched the interplay between sky and rock until only the stars were visible. 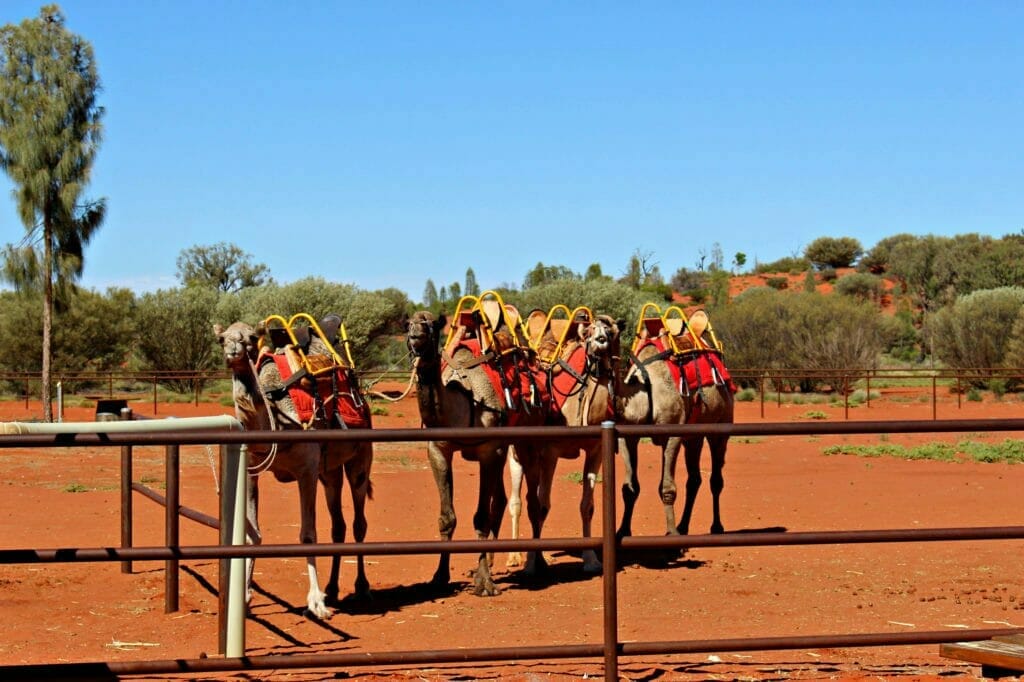 The highlight of the trip for all of us was the camel ride at Uluru Camel tours. We had two guides who loaded us on top of the humpy beasts and took us for an hour long walk through the desert dunes with Uluru and Kata Tjuta looming in the distance. We found a thorny devil along the path and were able to give it a quick pet. That night, we filed onto a bus and drove out to Bruce Munroe’s art installation, Field of Light, a 50,000 bulb exhibit that turns the desert into a magical fairy land once the sun sets. 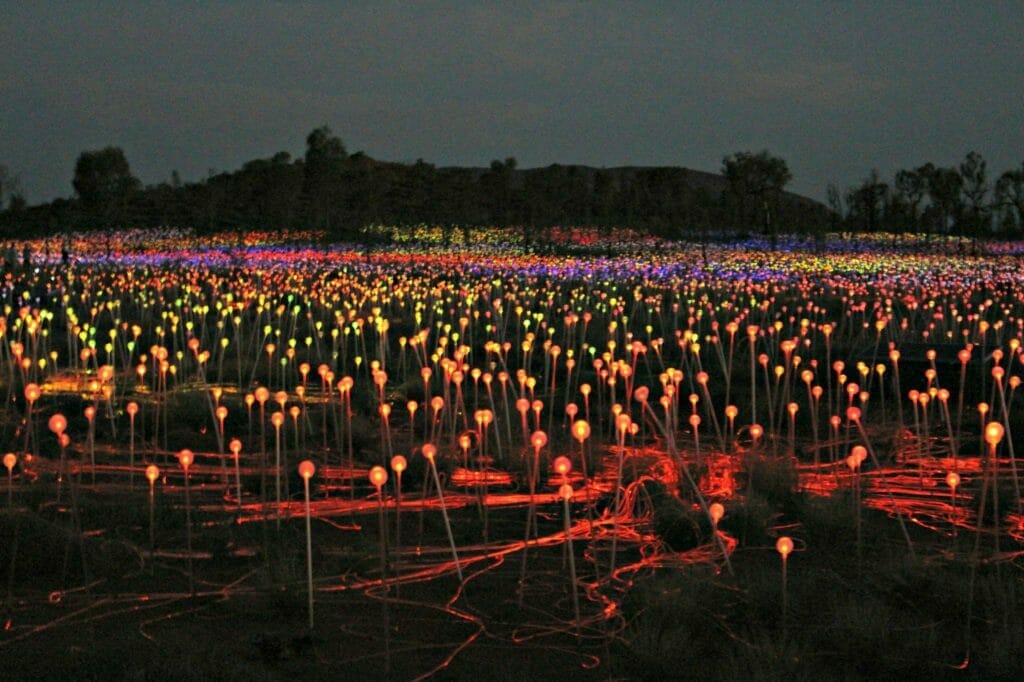 Valley of the Wind

Kata Tjuta and the Valley of the Wind walk is a winding 4.7km circuit through massive red domes, tree-lined waterholes and quiet canyons and was the icing on the cake. On our last day, we tramped around the resort visiting the Mani Mani Indigenous Culture Theatre for a show, the Wintjiri Art Gallery & Museum and took an impromptu astronomy tour with the astronomer in residence at his donger near our campsite. 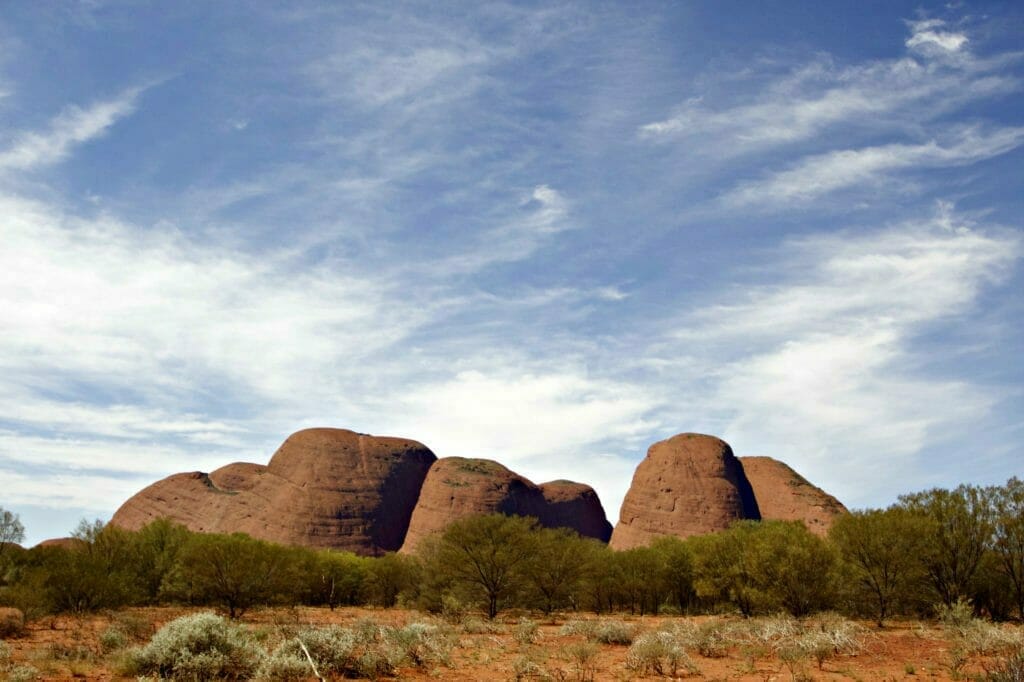 We headed back to Alice Springs feeling blessed and fully immersed in Central Australian dreamtime bliss. On our last few days, we trekked around the Alice visiting the truly amazing Desert Park, Olive Pink Botanical Gardens and just spending time back at the BIG4, at the base of the Eastern Macs, watching the boys go up and down the pool’s massive waterslide. I came home refreshed and transformed with only two loads of washing to tackle. 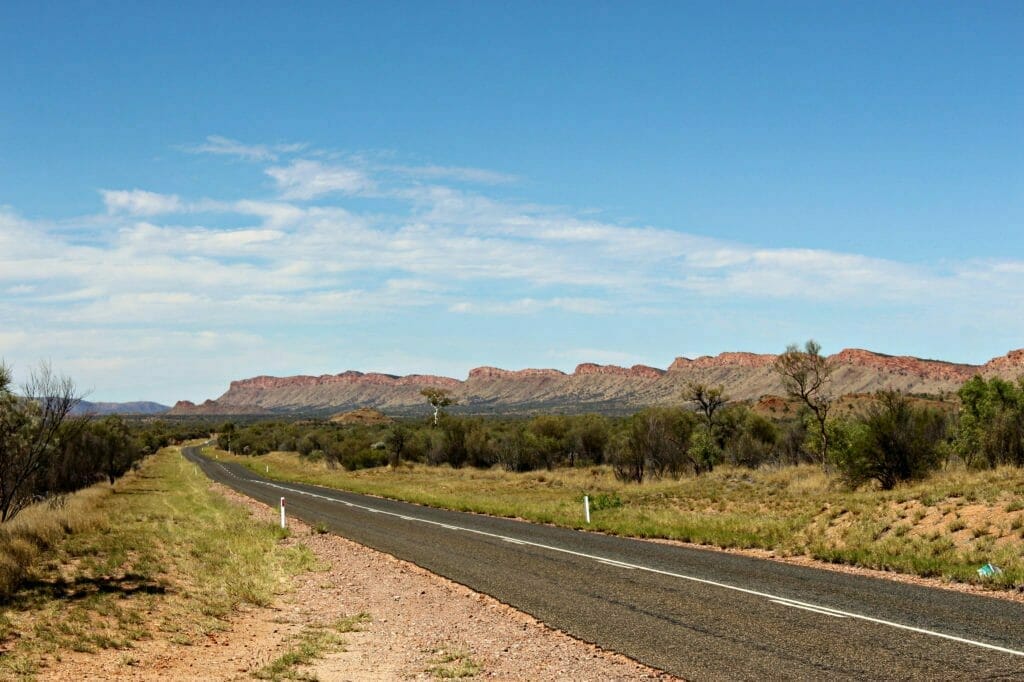 Pros: more time holidaying/ less time driving, the vehicle is someone else’s problem (no cleaning required), great for the time poor family (school holiday timeframe), can visit remote locations without having to own vehicle + trailer/ caravan, light packing only as all supplies were included with the rental, looking down at the desert from up in the plane.

Cons: unable to visit off road locations such as Rainbow Valley, Palm Valley and other sites on dirt tracks, expense of flying (3) people into Central Australia, don’t get to experience the gradual ‘decent into the desert’ when you drive from the coast, found the bed somewhat uncomfortable in the Apollo, the campervan was not suited for extended time off the grid (always had to charge it). 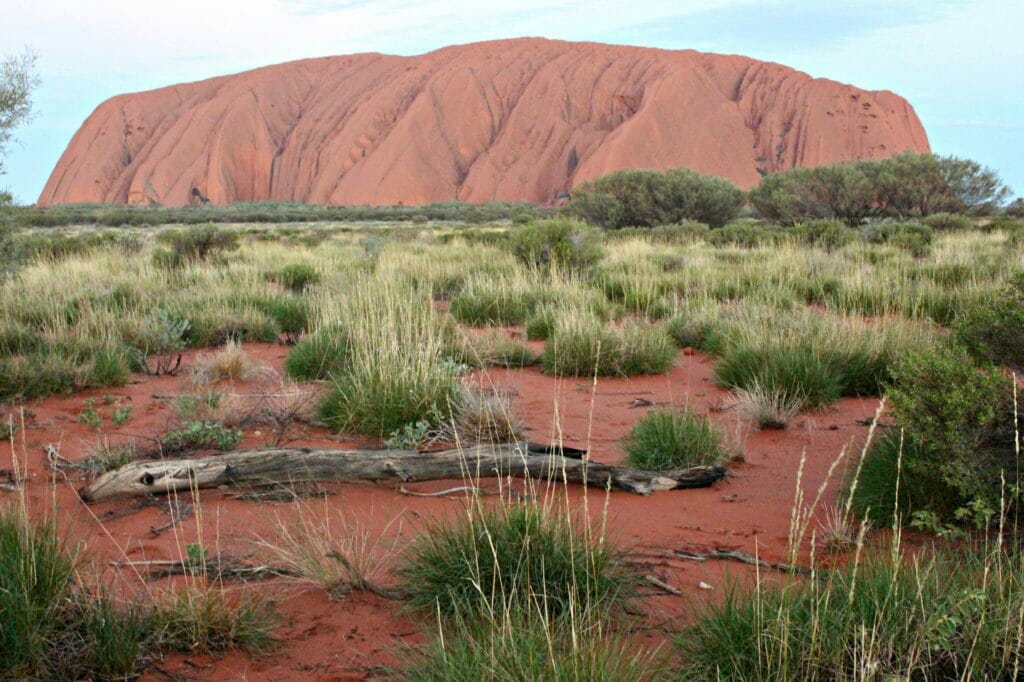 Tips for travelling to the Centre with kids 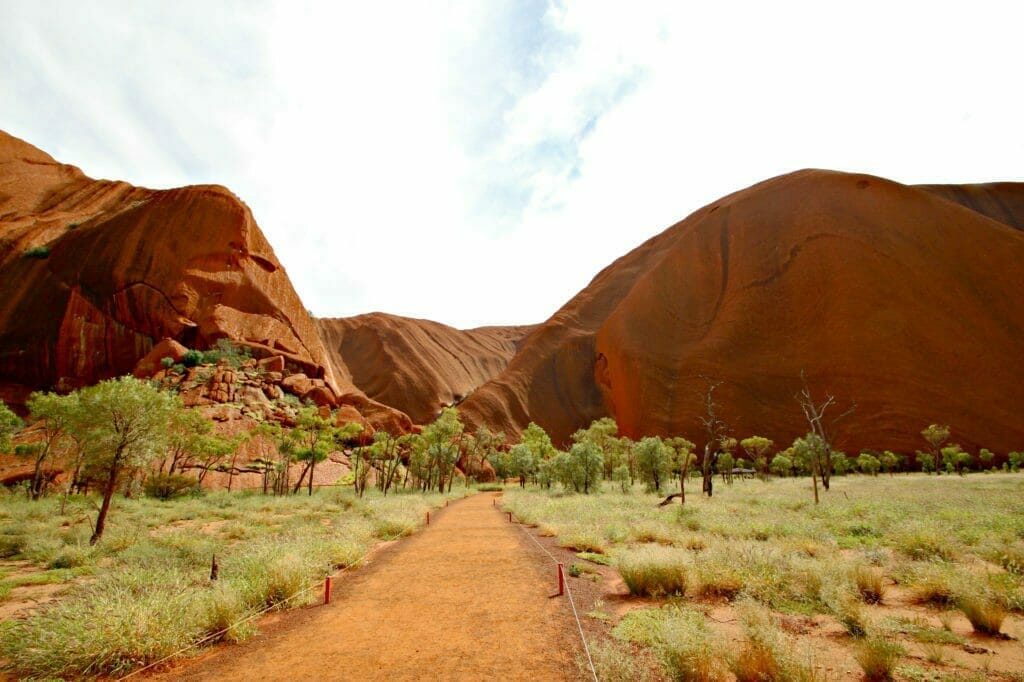 Plan to spend at least five days, four nights at Uluru-Kata Tjuta. If you book into the Ayers Rock Resort campground, expect to be disappointed. We survived by going to the Pioneer Outback Hotel for the pools and dining options. The various free activities and tours at the resort are wonderful.