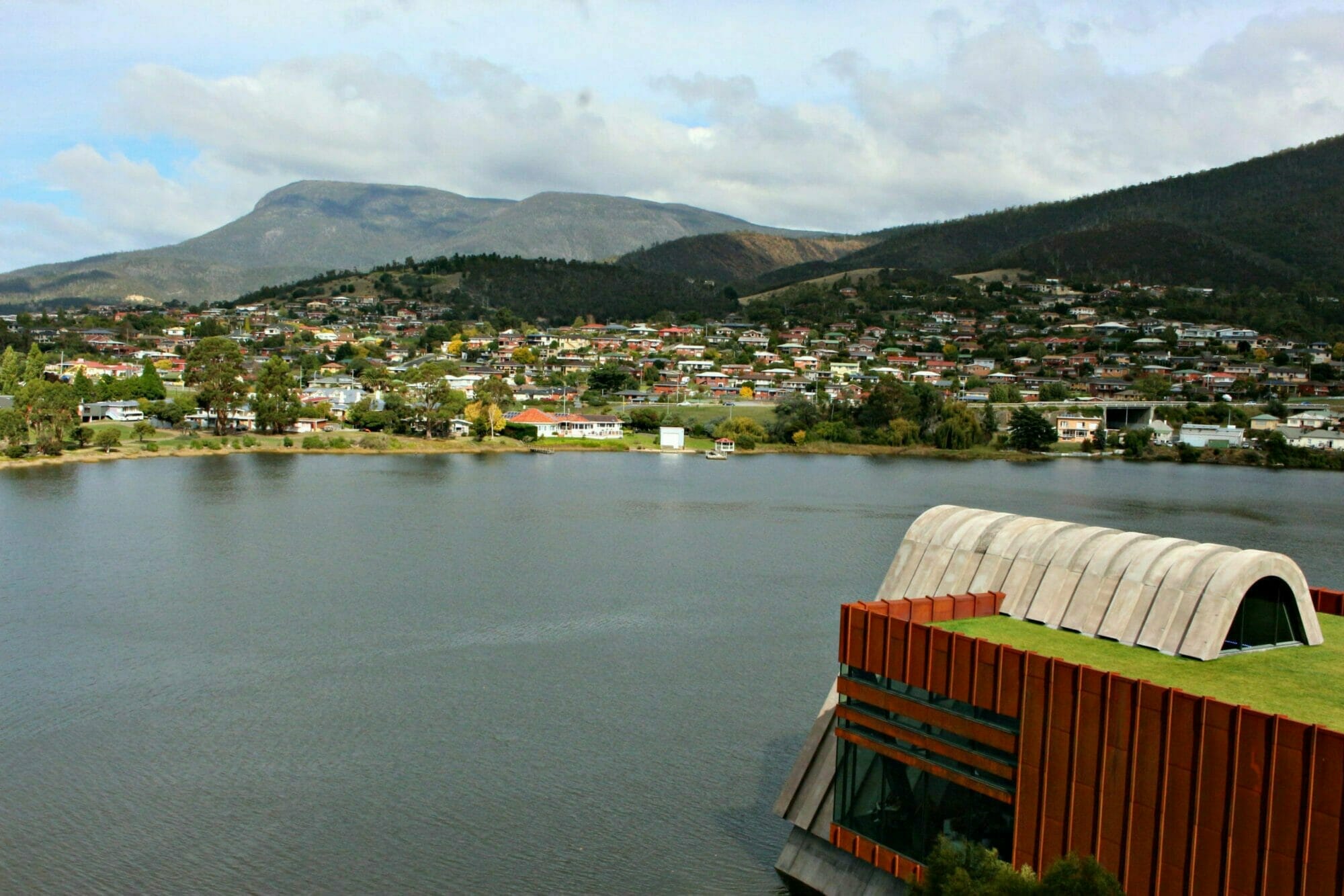 The southernmost Australian city – and smallest state capital, Hobart, despite its isolation and size – feels more English than than any other place on the mainland.

Rolling hills and ocean vistas, old, stone walls and Georgian cottages, ship masts scraping the sky of the harbour, cobblestones, oysters, roses and lavender all collide in a phantasmagoria reminiscent of the UK’s sleepy port towns and 17th century complete with piratey undertones.

Walking through the streets of Hobart, you almost feel like the possibility of commandeering a ship and heading east towards the Pacific to plunder the cargo freighters could actually go in your favour. But instead of risks here in Hobart, you opt for a sleepy day of driving and Devonshire tea with scones. Tassie, in all its natural beauty, is like living and breathing a poem.

From Hobart, we spent four days wandering Southern Tasmania – both not enough time and just enough to hit the major sites: Mona Museum, Willie Smith’s Apple Shed, historic Richmond village and finally Port Arthur. Tasmania never disappoints – especially not in Autumn with the orange and red deciduous trees and crisp air off the Southern Ocean from Antarctica. We sampled oysters on the roadside, fresh cider, lobster, the best coffee in Hobart and lunch at the famous Mona Museum. In terms of value for dollar, Tassie has every other location in Australia beat. It’s the best deal combined with the best experience and some of the friendliest people I’ve met in the world.

Hobart is Australia’s second oldest city, established in 1804 at the mouth of the Derwent River. From Old Wharf, where the first arrivals settled, to the fishing village of Battery Point, the area known as Sullivan’s Cove is still the hub of this charming city.

In Battery Point the streets narrow, gas-lit streets are lined with tiny fishermen’s and worker’s houses, cottage gardens, colonial mansions and pubs, and feels as though you’ve travelled in time to early colonial days. With its views down to the Derwent River, this historic neighbourhood was originally home to a gun battery, which was positioned to ward off potential enemy invasions. The old guardhouse, built in 1818, is just a few minutes walk from Hampden Road and offers a range of antique shops, art galleries, tearooms, and restaurants.

Once the industrial hub of the small city, Salamanca Place today is a row of beautiful sandstone warehouse sand the heart of Hobart’s art and creative centre. With the infamous Saturday markets, there is a range of art and craft galleries, antique furniture stores, and antiquarian bookshops housed in the old factories.

From Hobart, it’s only a short 25-minute drive to Willie Smith’s Apple Shed, an organic apple cider distillery. Here you can listen to local music as you try the delicious menu made from local, seasonal and sustainable produce, sample cider and tour the distillery.

Besides taking a trip to the top of nearby Mt Wellington – which looms over the city – dining at first class restaurants, funky shops, and old-timey museums, the best experience in the city is MONA. Go first class and arrive via their camoflouge catamaran ferry providing service to and from Hobart daily.

The museum is designed to be approached by water—like an island-top temple in ancient Greece awaiting the ocean-borne arrival of the faithful—so taking the ferry is the proper way to experience it. A direct trip between Brooke Street Pier and the museum takes around twenty-five minutes.

Choose from two different travel options. Purchase a standard ticket to sit on sheep/tigers, frequent our onboard bars and admire the spunky staff in their spunky boiler suits. Or, upgrade to the Posh Pit and escape the riff-raff. Enjoy complimentary drinks, canapés and inflated egos in our exclusive lounge, bar and private deck. Read about prices, accessibility, etc. here.

Founded by David Walsh AO – an Australian professional gambler, art collector, businessman and the owner of the Museum of Old and New Art (MONA) and Moorilla Estate – Mona Museum is a work of art unto itself. Walsh built his private art museum – dedicated to sex and death – and opened it in January 2011 on the site of an old winery.

Arriving by boat, you ascend a set of stairs to an artistic version of a tennis court. From there, it’s inside where you descend a large spiral staircase (or a cylindrical glass elevator), into a cavernous passageway cut through Triassic sandstone. At the bottom waiting for you is a is a bar. Past this first bar, the entirety of the museum lies underground and contains a library, a cinema, various performance spaces, restaurants and three levels of galleries.

According to Walsh, Mona is “a secular temple and a subversive adult Disneyland.”

To learn more about the enigmatic gambling millionaire David Walsh, and the founding of Mona, read The Monthly article here.

Just twenty minutes west of Hobart, historic Richmond village – nestled in the heart of the Coal River Valley – lures visitors with its small, country town charm. Established as a military staging post and convict station linking Hobart with Port Arthur, the village is famous for its elegant Georgian architecture, and beautiful heritage buildings dating back as early as the 1820’s now housing galleries, tea shops, craft boutiques and museums.

Richmond is living colonial heritage museum at every turn. Heritage-listed buildings are found on almost every street, so that even a casual evening stroll offers insights into early settlement days. More recently, the agricultural wealth of the Coal River Valley has led to the establishment of a number of vineyards and farm gates offering local food. It’s a lovey stop on the way to and from the bigger drawcard – Port Arthur.

Port Arthur lies about 100km southeast of Hobart on the Tasman Penninsula. The site forms part of the Australian Convict Sites, a World Heritage property consisting of 11 remnant penal sites originally built within the British Empire during the 18th and 19th centuries on fertile Australian coastal strips.

Port Arthur was named after George Arthur, the lieutenant governor of Van Diemen’s Land. The settlement started as a timber station in 1830, but it is best known for being a penal colony.

From 1833 until 1853, it was the destination for the secondary offenders of the convicted British criminals. Rebellious personalities and tough cases from other convict stations were also sent there. In addition, Port Arthur had some of the strictest security measures of the British penal system.

The History of Tasmania and Port Arthur from Lonely Planet,

The first European to spy Tasmania was Dutch navigator Abel Tasman, who bumped into it in 1642. He named this new place Van Diemen’s Land after the Dutch East Indies’ governor. European contact with Tasmania increased after the British arrived at Sydney Cove in 1788 – Van Diemen’s Land was a convenient pit-stop en route to New South Wales. In 1798 Matthew Flinders circumnavigated Van Diemen’s Land, proving it was an island.

In 1803 Risdon Cove, on the Derwent River, became the site of Australia’s second British colony. One year later the settlement moved to the present site of Hobart, where fresh water ran plentifully off Mt Wellington.

Convicts accompanied the first settlers as labourers, but penal settlements weren’t built until later: on Sarah Island in Macquarie Harbour in 1822, on Maria Island in 1825 and at Port Arthur in 1830. In subsequent decades, Van Diemen’s Land loomed apocalyptically in British convicts’ minds – the most fearsome, terrible of destinations. By the 1850s, every second islander was a convict, and Hobart Town and Launceston festered with disease, prostitution and drunken lawlessness.

Flights direct from Sydney, Brisbane and Melbourne to Hobart via Qantas/Jetstar.